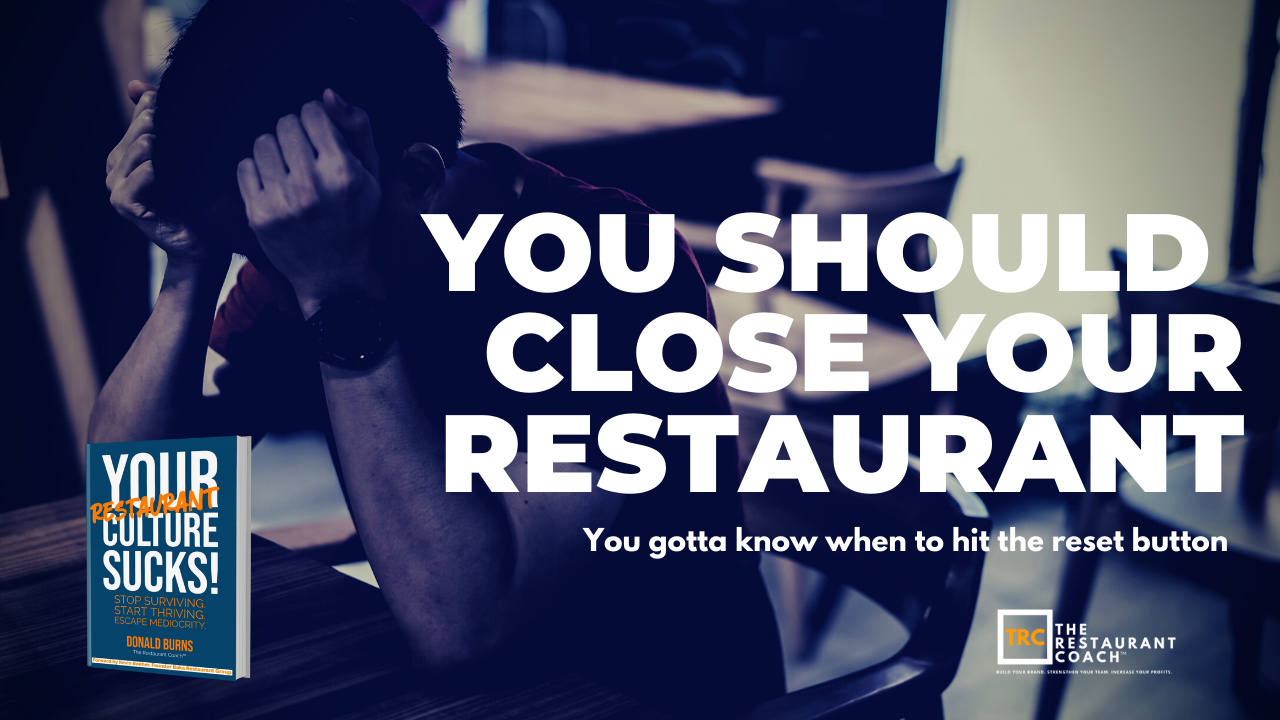 You Should Close Your Restaurant

*The following is an excerpt from my new book: Your Restaurant Culture Sucks coming out in September 2021.

"You should close your restaurant."

I can’t believe the words just came out of my mouth. There was a very long silence on the other end of the Zoom call. Enough silence that you knew deep down this person never expected you to say that….yet, there I was telling a restaurant owner those very words.

It made me sick to my stomach and quite frankly relieved at the same time. Every week on his coaching call it was the same bullshit and excuses why he couldn’t implement the tools I have been giving him over the last eight months.

His general manager was just one excuse after another why she couldn’t complete any of the tasks I assigned to her. She was over her head and wouldn’t admit that she was drowning and taking the entire restaurant down with her.

In twelve years being The Restaurant Coach, I have only told three restaurant owners those five words,” You should close your restaurant.” Now, you would think that with the titles of my books: You Restaurant Sucks, Your Restaurant STILL Sucks, and my newest one (Your Restaurant Culture Sucks), that telling someone to close the doors would be easy?

No. It’s hard to tell someone to close their restaurant.

It’s soul crusher to see someone who invested in a coaching program, knows they must change or become extinct.

It’s also my duty to protect your brand, even if that means protecting it from you.

When you commit to working with me, I am committed to doing everything I can to get you to implement the changes you must make to turn your restaurant around. But, you have to take new actions…

You can call it “tough love”, “straight talk”, or even being “rude”. Yes, I’ll curse and get extremely frustrated at times. I will never talk down to you. I only want you to care as much as I do about getting the restaurant and life you deserve.

So many people want a better restaurant and a better life and when it comes time to make the tough decisions and “cowboy up” they back down and retreat to their comfort zone.

Do you know of anything great that came from being comfortable?

I can’t think of one!

And believe me…I thought about it!

Getting comfortable is the most dangerous place mentally you can ever reach because when you become comfortable, you really are just numb.

You don’t want more and you don’t want less. You settle for what you have and convince yourself that things are “good”.

“I’ve tried a few times to raise my standards and push my team to be better. But, they resist and it was too much of a fight. So, I just accepted that this is the best we’ll be. I could lose too much if I keep pushing them. Better to just keep what I have.”

Okay, maybe that was a little over the top….

That’s really what you are saying to me when you say things are “good”.

When restaurants fail to make the changes they must make it doesn’t take much to see where the issue is.

That would be the owner.

To be specific, it’s the owner’s mindset.

I could easily estimate that 99% of what holds restaurants back from growth or even profits is a mindset. Right, you’re probably saying, “Okay, Coach. Who would not want a profitable restaurant?”

I didn’t say it makes sense. Most of the crazy shit I see restaurant owners do doesn’t make sense to me at all. Here’s what I have learned to understand…

It might not make sense to me, but it makes sense to them.

Their mindset (and your mindset too) sees the world through a unique pair of eyes…yours.

Now, what do these hidden triggers do to your mindset?

They make you a little less trusting and perhaps a little jaded about the world.

Harry is Dead, He Just Doesn’t Know It

When I mentioned earlier that I told an owner that he should close his restaurant and it wasn’t easy.

The sad part is that Harry (the owner) is losing roughly two thousand dollars a day! The other sad thing is he thinks that increasing sales will solve all his problems.

Sales do solve a lot of issues if (and take note here)…if your restaurant is set up from the start to be profitable.

How do you do that?

You do the necessary groundwork before you open! That includes have every item on all your menus cost out down to the penny. That means knowing the minimum viable staffing you’ll need to run a shift. Oh, here is a little inside tip: your team always thinks they need more people to handle the workload. The only exception to this is the service team always wants fewer people on the floor so they can make more tips.

When you set up your restaurant to make it easy or better for the staff and not what is best for your guests (or your profitability)…you’re dead. You just don’t know it.

When your team runs the restaurant on their terms it’s very much like having the tail wag the dog. It doesn’t work.

There Is Still an Option

If Harry doesn’t close his restaurant it’s going to drain him so badly financially that he might never recover.

Now, my follow-up advice was that he shut down and start fresh!

No one wants to think of all the crap that it takes to start over. However, Harry is in such a bad situation that it’s either start fresh or close it down for good.

My latest book is all about culture.

You need to understand that culture drives your restaurant. It’s so important, yet so many don’t give it the attention or focus it deserves.

That my friend is the sad thing. Culture is created either by design or by default. You want to be as active in the creation of your culture as you are with those other areas of your restaurant that you love like menu design or restaurant design.

The first step is to get clear…and I mean crystal fucking clear about what you want your culture to be. You do it with those other areas so why not your culture?

If restaurant owners would shift their attention to the team experience as much as they do the guest experience…the industry would not be in the labor turmoil it currently has now.

Just to get things started the right way, let’s give a definition of what culture really is…

Many think culture and brand are one and the same. Not quite.

Brand = what your guests say about you to their friends, family, and in online reviews.

Culture = what your team says about you to their friends, family, and to each other!

They exist in a symbiotic relationship. One feeds the other.

You’ll want to take notes (lots of notes) throughout this book as I am going to give you tons of gold nuggets on how to create a culture that will allow you to make more while working fewer hours in your restaurant.

What Happened to Harry?

After a month of deliberation, Harry finally decided that he wasn’t cut out for the restaurant industry. Like many who start a restaurant, he had the misconception that it was easy!

For the record restaurant success is simple. Now, I said simple BUT it’s not easy. Hey, if it was easy we wouldn’t see 50% of new restaurants close their doors within three years of opening.

The good news is that you’re here now and you are feeding your brain some good stuff! Just remember that everything you read in my books is a potential tool. Reading a book gives you knowledge. Actually taking that information and applying it to your business to create results is power!

I encourage you not to take this lightly. The things I share with you in these blog posts and podcast episodes have changed the trajectory of over 2100 independent restaurants and I know they can help you if you apply them.