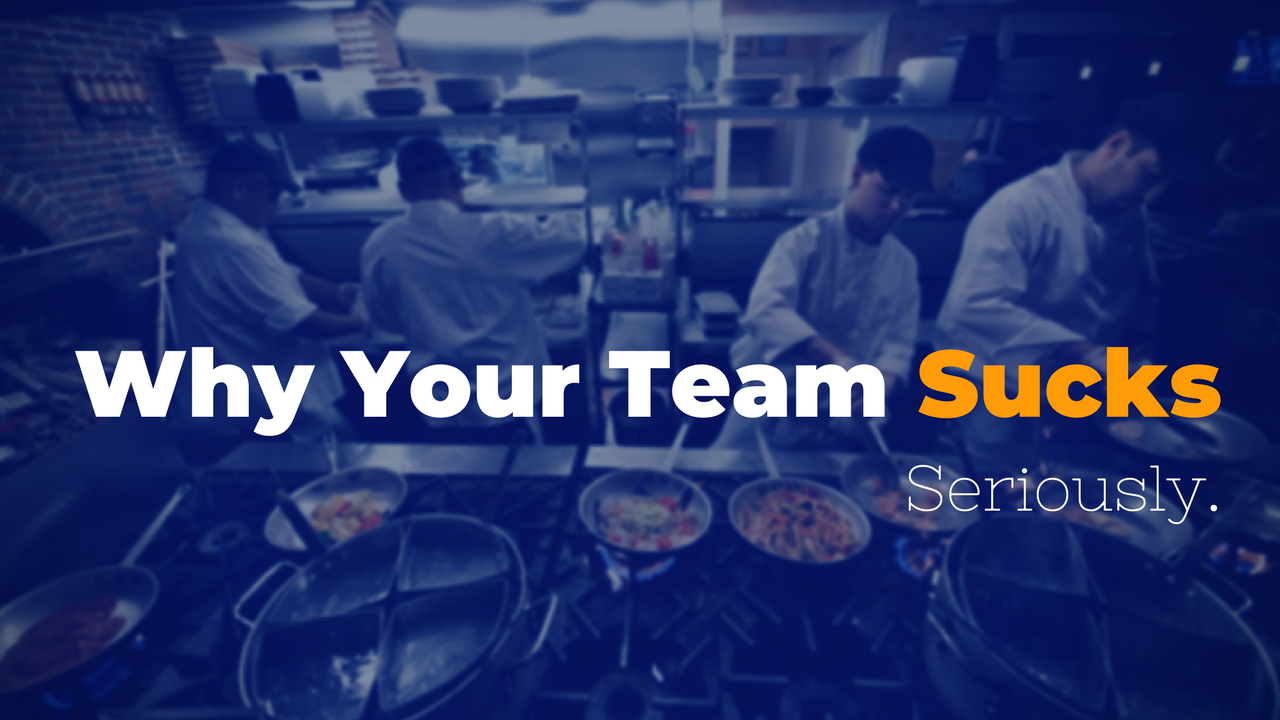 Why Your Team Sucks

How we love clichés — especially when it comes to teamwork.

These sayings and so many more are seen on coffee cups and motivational posters in restaurant offices everywhere. We have preached teamwork so much that the idea of teamwork has become diluted. We have poisoned our own restaurants by talking a good game that on the surface sounds wonderful. What we end up with in reality is far from the uplifting quote floating around the employee bulletin board or mentioned during pre-shift.

We have become cynical and weary when other talk about teamwork as if it is the proverbial “boy who cried wolf.” While we want teamwork, it has become elusive and hard to find in today’s restaurants. Sure, it’s easy to blame the younger generation and say they don’t know what teamwork is all about. That is an easy out and is not accurate. If they do not know what teamwork it, it is because of the fact we have not set the example. Let’s talk about why teamwork doesn’t always work.

They Don’t Know What Real Teamwork Is

We throw that word around pretty easily. You have heard it a thousand times, and just like those clichés, we know all know teamwork exists, however, most have not truly experienced it. We think teamwork is everyone working together in harmony for the greater good. That’s nice. Very Pollyanna yet nice. The truth is that teams work when we pull people into the team who respect and trust each other to do their jobs.

The best example of precision teamwork is to look at military special operations teams like the Navy SEALs, Army Green Berets, or USAF Pararescue. These are highly trained teams that can be deployed anywhere in the world in a moment’s notice to carry out highly specialized operations. The one rule these teams have is to trust each other. They might not like everyone on their team on a personal level, however, they have respect for each other and trust that their teammates will do their jobs when it counts. Write this down: Trust. Builds. Teams. If you do not trust your team, then you do not have a team.

Too many people think that teams must get along and be friends. Actually, friendship can hurt some teams if teammates are not mature enough to understand the difference between friendship and teamwork. As mentioned, you do not have to be friends with everyone on your team, you just need to respect them and trust them. Without those two key elements your, team will never come together.

Each member of the team must also become the best that they can be in their position on the team. Special operations teams have a variety of specialists. High-performance teams share a common trait of competitiveness and a deep desire to become the best. When the team leader sets the standards high enough and refuses to lower that bar, team members have the choice to either rise to that level or lose their place on the team. You have to understand that the strength of a team is the strength of each person on the team doing exactly what they say they will do when they say they will do it. Trust + Respect + Skill = High-Performance Team

The Wrong People Are in the Wrong Places on the Team

Too many times we just throw people on a team without considering the impact they have on the current team dynamics. We rush to “fill a position” too often without asking questions that could save us disappointment down the line. Business consultant and author Jim Collins said it best: "Get the right people on the bus, the wrong people off the bus, and the right people in the right seats.”

You must take into consideration how each new person will affect the team. That is why an in-depth interview process is a must. You have to really vet a candidate to uncover who they truly are, think about the current team dynamics, and what will happen when you add another personality to the recipe. Using a behavioral survey is a smart move to get a preview of what to expect. There are quite a few on the market like DiSC® and ProScan® (this is what I use with my clients) that will give you a great way to understand what behaviors might come out when they are stressed, how they tend to communicate, and how they will approach the accomplishment of tasks. While they are not 100 percent accurate, most get close to 95-percent accuracy and that is a great way to hedge your bet.

Too many high-dominance or direct personality types, and you’ll have a team where everyone wants to lead and will spend a lot of trying to sort out who is the leader. You hear, “Well, Joe said do it like this.” And the other dominant will reply, “No, we’re going to do this instead.” Then the rest of the team will quickly become confused as to what to do. This leads to a breakdown of the team.

Building a team is like creating a recipe. You need a balance of personalities to make a team work. That requires being extremely selective when choosing people to be on the team. Then once you have the new person on the team, you must be diligent to observing how that people is working within the team. That is the part Jim Collins mentioned about having people “in the right seat.”

Sometime you will need to move people into different roles for the overall welfare of the team. Team dynamics are built upon the concept of what is best for the team collectively, not the individual. Think of it like four tires on a car. If you have on tire that is a different size or either under-inflated or over-inflated, the performance of the car will suffer. It will affect gas mileage and how fast you can go. The same for a team member in the wrong position. Remember, without the basics of trust and respect the team will not come together.

There Is Not Enough Training

Too many restaurants fail to pull a team together because they fail to train adequately. They might go through a very elaborate interview and screening system, and then fall short giving the team the resources needed to become outstanding at their job. They give minimum effort in training yet expect the team to be stellar. It just doesn't work that way. That would be like going to the gym for one week and think you are ready for the Olympics. (Good luck with that.)

Training is not something you do just during the onboarding phase. Restaurants that function that way have what is known as a training culture. They just do some training now and then wonder why the team does not really get better overall. Sure, you'll have some outliers that pick thing up quickly. However, most of the team is stuck in the middle. The last place you want to be is in the middle. The middle is for average and mediocrity.

Great restaurant teams are found where there is a culture of learning. You can always improve and you can always become better. Always. To quote the great military strategist Sun Tzu from The Art of War, "Every battle is won or lost, before it is ever fought!"

Translation for restaurants:  How you train your team is how your team will perform.

How can you become better? Invest in books, audiobooks, bring in experts to conduct workshops, and share blog posts. Subscribe to industry newsletters from sites like Foodable Network, Modern Restaurant Management, or Toast Restaurant Management Blog. Tap into the vast amount of online training resources like those at Typsy, The Restaurant Coach™ University, or Rock My Restaurant. It’s never a lack of resources that stop restaurants from training more, it's lack of resourcefulness. If it becomes a must to be a learning culture then you will find a way to make it happen.

There Is No True Leadership

The downfall of most teams is there is not a true leader, just a boss. The boss comes in and pushes the towards the goal of task. A true leader shows the way and sets the example. The boss is a hypocrite who says one thing and does another. The boss plays favorites with certain members of the team and gives the cold shoulder to those that they do not really like. A leader backs up their words with their own actions and they treat everyone on the team with respect. Once again, you do not have to like everyone on your team on a personal level. This isn't about group hugs and singing “Kumbaya” together. This is about respecting the skills each team member brings to the table and trusting they will do the job as expected.

You hear a common phrase thrown around that, “it’s not personal, it's business.” That is a bunch of bullshit! True leaders take their business personally because it is a reflection of themselves. True leadership is looking in the mirror and being happy with the person staring back at you. If you were to look in a mirror right now, could you honestly say you trust and respect that person looking back at you? True leaders channel that same energy into their team!

A true leader also holds the compass and map for the team. The map is your vision and direction. A true leader constantly talks about them to the team so they are not kept in the dark. The compass is your core values that keeps the team energy fueled up and focused on the tasks that need to be accomplished. While a true leader shares these tools with the team, they never relinquish them. The true leader is the protector that keeps the team on track. Too many bosses think that barking orders and using fear and intimidation is leading. It’s not. These bosses also experience high turnover yet do not think they are the problem. If you have high turnover, then you ARE the problem.

Most teams do not work because the leader does not understand what teamwork truly is and how to pull a real team together that can do the work. They “panic hire” to fill in an empty position. They don't train enough to set the team up for success. They act as a boss and not a true leader. They just want easy, but real teamwork is anything but easy. It takes courage, determination, and a constant pursuit to become better every day to form a real team. For those reasons, most teams don't work.

You have the power and ability to change that today by stepping up and making a decision to invest first in becoming a true leader and then to build a team through training, trust, respect, vision, grit, willpower, focus, tenacity, and common core values.

Then, and only then, will you have the chance to become a legendary team.