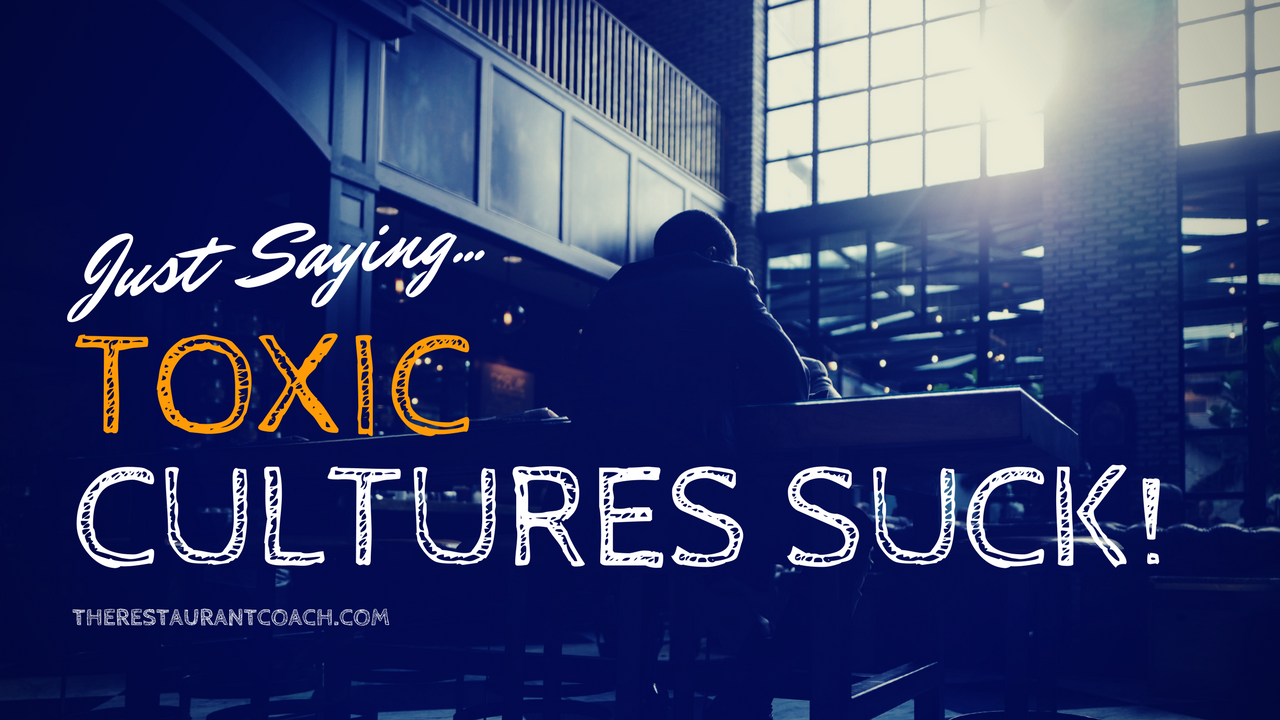 Your restaurant's culture is the life force of your brand. It creates energy. That energy transcends and influences your staff. That trickles down to encompass the guest experience. To those on the outside looking in, it can be either a beacon or a warning sign.

A toxic culture is a symptom of a much deeper condition: the total absence of leadership. The good news is that toxic cultures can be spotted and treated. Determining how aggressive you need to be with the treatment will depend on how bad the toxicity has spread into your brand. Like cancer, toxic cultures have one mission and that is to destroy your brand one person at a time. Just like in the fight against cancer, early detection is your best chance. So, how do you spot a toxic culture? Do you have one?

Check out these warning signs and see for yourself.

Most restaurant managers run on principles and techniques from the 1970's. Why? Because most are just passed along from mentor to student year after year and no one probably stopped to say, "Are you sure this is a good idea?" Basically the blind leading the blind.

Think about it. Most managers are trained to not question authority and just do what they are told to do. This is probably the number one issue that some have with the Millennial generation, they are wired to question and not follow blindly.

If you have worked under outstanding leaders, then you're good. If not, then you are modeling the behavior of some bad managers. You might not even be aware of the behavior because it has become unconscious.

Not that you want to hear this, however, you are wired to be a conformist. Human beings are herd animals. We survive only in highly coordinated groups. Individually, we are designed to pick up social cues, coordinate and align our behavior with those around us.

So, if your model of what a manager is was not a very good model, then you unconsciously picked up some similar behaviors. Now that you have been shown the truth, you have options. Remember that awareness precedes choice and choice precedes change. Is your current management style serving you and those around you? If not, time to get off this road and head down a new one.

Have you heard of carrots and sticks? That old management theory that is based on the system of reward and punishment? This one theory has been around since the 1950's. The problem with it is two fold.

A. The reward becomes the only prize and that has an addictive quality. The person soon needs a bigger reward and for some restaurants that is difficult to maintain if it is purely a monetary reward.

B. Usually, you base the carrot and stick system on what you think will motivate the employee. Assumptions are the last thing you want to use as a management technique. Have you ever asked? It is better to sit down and talk to them and see what they would like. The trick is: don't lead them to your answer with questions like, "What amount of a bonus would make you happy?" Let them do the talking.

Carrots and sticks do work if you do them correctly. Here are some guidelines:

Don't make it all about money. Some people actually can become offended thinking you are trying to buy them.

Here's another classic outdated technique: break them down and build them up. The first thing to do is stop watching Chef Gordon Ramsay on Hell's Kitchen. (Drama is great for television, really bad for restaurants.)

Yelling and screaming at people works on one emotion: fear. Fear does nothing to build a high-performance team. Fear suffocates. It takes the positive energy out of a room faster than a fire does to air!

There was a restaurant owner that was overheard saying that his job was to make sure his employees feared him. He actually believed that was his mission to put the emotion of fear into his staff. Do you think fear and hospitality can co-exist? No. One takes energy and the other gives energy. If you haven't noticed, everything is energy.

If you said yes to any of these questions— you have a toxic culture. If that serves you and you enjoy high turnover, then by all means continue. If you don't, time to get that raging monster under control. Oh, and stop watching reality TV shows!

They say power corrupts and that absolute power corrupts absolutely. If your restaurant is big on titles and hierarchy, then you might have an issue with the power paradigm. It's a battle as old as time. The tighter you try to wrap your hands around things trying to control them, the more that slips through the cracks.

Power and its cousin fear come as a package deal. One feeds the other. The more power you get; the more fear appears whispering in your ear all those things that "could" happen if you lose control. Managers who run by power have some easy signs to recognize. See if any of these scenarios and actions look familiar:

They seem to have a lot of "private" conversations with only some people on the team. Basically, if you are not in the "inner circle" you can't be trusted.

They have the belief that without them the restaurant would fall apart. They make this known to everyone when they return. "I leave for just two hours and everything goes wrong!" Yeah. It's doubtful that everything went wrong. People who use power to control also use what is known as "all or nothing" vocabulary. Everyone, always, never... as in: “everyone is lazy”, “you always mess up”, “you’re never on time”. Any of those words, sound familiar?

They keep teams separated. For someone in power, the last thing they want is for the team to figure out that together they are stronger than the manager. They will use words to keep people apart and build imaginary walls. Front-of-the-house versus back-of-the-house, this location versus the other, day staff versus night staff. All designed to divide the staff from forming into a team.

Now, before you say, "Well, I am not replaceable." Let's get this out there: Every position in your restaurant is replaceable. People are not replaceable, that is for sure. You are one-of-a-kind. They will never be another you. Your job? That's another story. Maybe, your replacement won't do it just like you. Maybe they will do it better. Either way, tell that voice in your head, called fear, to sit down and shut up.

Many restaurants have lost key leaders or even been sold to new owners and have seen great success. Colonel Sanders and Ray Kroc has been gone a long time and both their brands still bring in billions in revenue. Yes, that's billions with a B.

If you are sitting there thinking that you might have a toxic culture going in your restaurant, the first thing to do is stop it. Realize that you cannot make things better until you first stop making them worse. Will it be easy? Of course not. Anything worthy requires effort, energy, and consistent action.

If you are willing to be honest, take a hard look at yourself and if your culture is showing signs of being toxic, you have a chance to save it.

That is a choice only you can make.

Also, subscribe to The Restaurant Coach™ YouTube Channel for tips to take your game to a higher level.