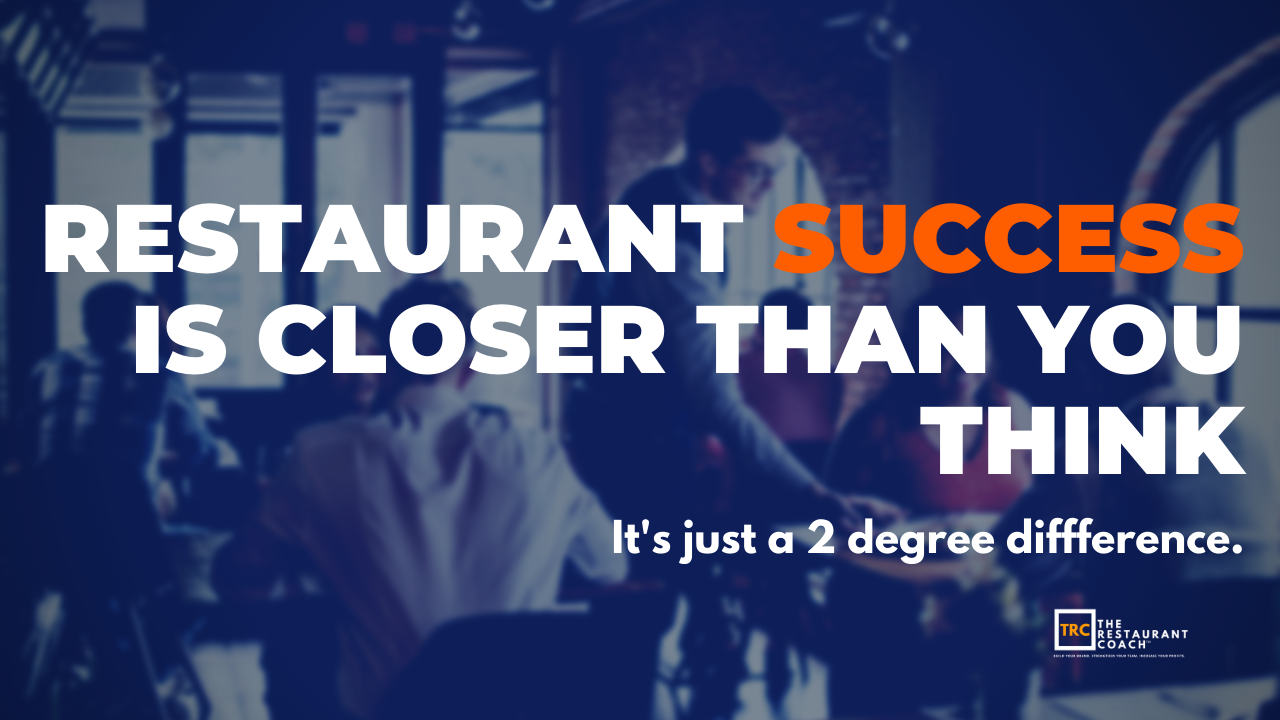 Restaurant Success Is Closer Than You Think

In 1979, a DC-10 Passenger Jet flew from New Zealand to Antarctica on a sightseeing excursion on Air New Zealand flight 901. This 8-hour flight would provide passengers an experience of a lifetime: a chance to see the bottom of the world. 257 passengers and crew members took off at 8:20 that morning for a routine round-trip sightseeing trip with great anticipation to experience a part of the world very few people had ever seen.
Unbeknownst to the flight crew, someone mistakenly changed the flight plan…typing a “6” into the flight computer instead of a “4” when entering the final number of the latitude and longitude coordinates.
This simple mistake changed the flight plan by a mere two degrees…a very small mistake…but one that changed the course of the flight East by 28 miles on the flight to Antarctica. While the pilots were both very experienced, neither had flown the Antarctic route.
There was no way for them to know their new course put them on a collision course with Mt. Erebus, an active volcano rising above the frozen Antarctic landscape by 12,000 feet.
As the plane approached their destination, they encountered bad weather that made visibility difficult. Because they thought they were 28 miles to the West, the pilots descended to below 6000 feet so the passengers could see the terrain and the penguins of Antarctica.
As the pilots flew on, the snow and ice on the volcano blended with the white clouds of the weather system, and the pilots thought they were flying over flat ground. By the time the plane’s instruments detected the ground was rising towards them, the pilots had no chance to pull out.
At 12:49 pm, the plane crashed into the side of Mt. Erebus at 400 MPH, a tragic accident where each of the 257 passengers and crew members died. Air New Zealand Flight 901 is still the single-largest tragedy in New Zealand history and the fourth-largest flight disaster of all time.
All from a seemingly small, 2-degree mistake, only 28 miles in a flight of over 2,500 miles.

As we approach 2021, restaurant owners often pause to course-correct. Some may be ahead of the goal, others may be right on track. More than 60% will not be on target. The data shows that restaurants are failing right now at a concerning rate. As a result, course correction is more important now than ever before.
Don’t Fly Blind!
As I’ve worked with over two thousand restaurants in the last 40 years. I’ve learned that success and failure for restaurant owners, operators, and chefs often comes down to mistakes of only a few degrees.
Too often, restaurant owners push the throttle to full speed and put their heads down in the pursuit of more gross sales. With this approach, many restaurants get to the end of the month, quarter, or year and are disappointed with where they land with their profits.
What most fail to understand is quite often, a course correction of only 1-2% can be the difference-maker between success and failure in the pursuit of their profits.

This is why coaching continues to be the primary catalyst in nearly every key performance metric. Most of the time, it is small adjustments done over time that lead to massive results.
Unfortunately, many owners see coaching as something reserved for their under-performers and that they don’t need coaching. Remember that culture flows down and not up, so when the owner doesn’t participate in the coaching, there is little to no buy-in from the team on the value of coaching.
Unfortunately, I think more restaurant leaders agree with this perspective than we know.
Two Sides to the Coaching Coin
Too often, restaurant leaders think coaching depends on the skill of the coach. While the coach has the responsibility for helping create a culture of intentional improvement and to use tools to help create consistency, predictability, a level-up mentality, and a collaborative environment, the role of the restaurant leader is equally important.
The leader must also adopt an attitude of constant never-ending improvement (Kaizen) and commit to ongoing course correction. This means that restaurant leaders need to learn to self-correct.
The longer the journey, the more important course correction becomes. If a pilot were to take off from Singapore, a city located on the equator, and fly around the world off by only 1 degree, this small adjustment would result in missing Singapore by over 500 miles…or an extra hour of flight.
If the plane were to fly around the equator from Singapore and were off by 2 degrees, the impact grows to over 1000 miles. The impact of this mistake makes landing in the desired place nearly impossible.
Which Leader Are You?
I have found there are two types of restaurant leaders: Those that take what they want, and those that take what they can get.

The take what you want leaders value coaching.
They use predetermined moments to use formal coaching to look at key metrics and indicators that are predictive of future outcomes.
Leaders and their team set interim coaching goals to modify behaviors or develop new skills that will help them stay on course or get on course to a destination they are excited about.
These formal coaching sessions will stimulate unlimited numbers of informal coaching conversations where the leader and the team evaluate how their “flight plan” is working.
Create a Clear Pathway to Success
Creating a coaching cadence isn’t hard.
As a restaurant leader, if you come to a coaching session prepared with 2-3 things you believe will help you stay on course, you will find your coach will be more helpful in collaborating and creating action plans you believe in.
Coaching done right should be like visiting the eye doctor. As the patient looks through the lenses, the doctor drops different lens adjustments into the machine.
The patient looks and gives feedback to the doctor who keeps making adjustments until the patient sees with the clarity they never had on their own.
If both the patient and the doctor do not work well together, the visit is an exercise in futility. The same goes for restaurant coaching. It is not a done FOR you process, it’s a done WITH you process!
Self Correct…Don’t Self-Destruct
No high performing restaurant leader wants to miss their number. No owner wants their team to view the coaching as a “waste of time.”
As owners, work with your leaders to create a system of self-correction.
My experience has been when leaders begin to look through the lens of self-correction, they use tools like Restaurant KPI Mastery with a different purpose, they are more assertive in finding ways to stay on course, and the combined leader/ coach dynamics leads to things like higher performance (18% increase), stronger engagement and retention (22% better), and the guest experience is noticeably improved (a 23% lift in positive reviews).
Regardless of your economic philosophies, these are trickle-down economics we can all get excited about.
Don’t let 1-2 degrees take you to a place you don’t want to be. Don’t save the course-correction conversations for the end of quarters or the end of the year. Adopt an approach of continuous self-correction.
Remember: the shortest distance to your goal is a straight line.
Small adjustments (if not handled immediately) add up over time to become big problems. Self-correct, work with your coach, and let your competitors self-destruct all around you while you complete your journey and land exactly where you had planned.

If you want to experience the power of coaching first hand, then join my #1 group coaching program called The Restaurant Coach™ University! You get 2 hours of LIVE coaching with me personally each month, plus 24/7 access to my private training library, plus an invite to my TRC community where you can ask questions and get answers 7 days a week from restaurant owners and myself.
Join now and set your restaurant up for massive success in 2021!