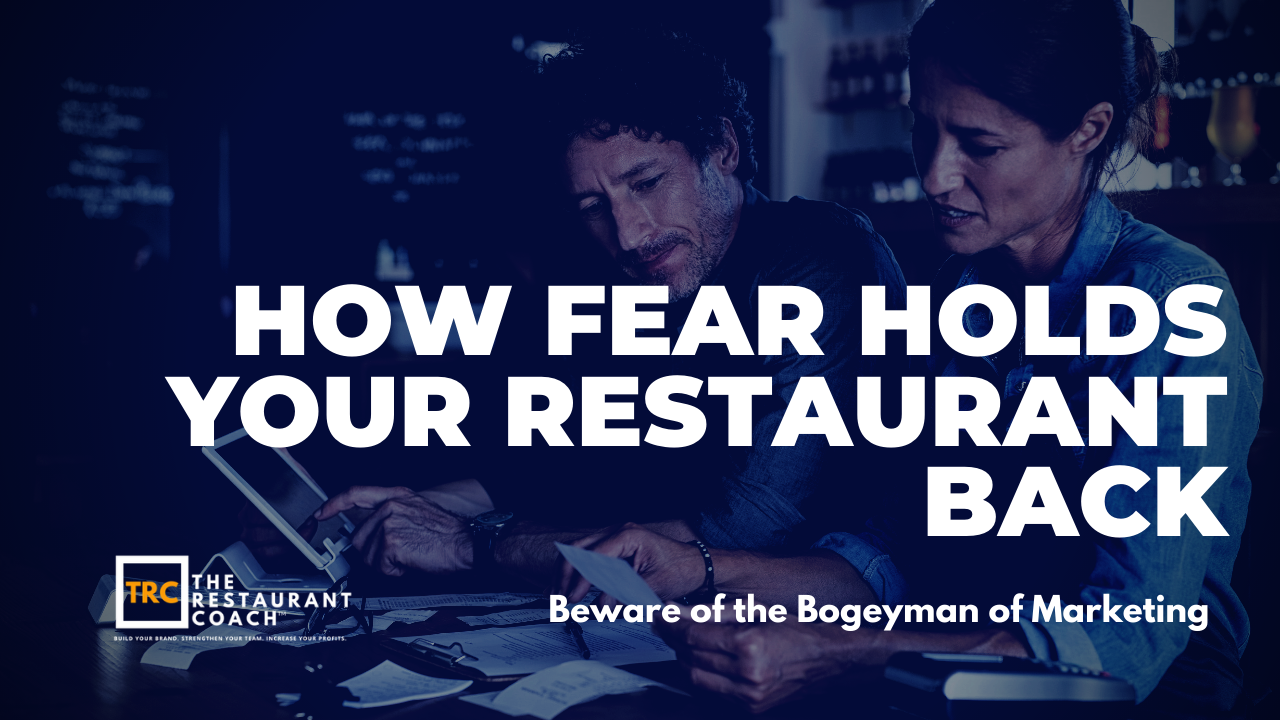 How Fear Holds Your Restaurant Back

Gather ‘round and allow me to tell you a tale. The names have been changed to protect those not so innocent. Let this tale be a precautionary lesson for you to not go down the same path lest you suffer the same fate as this restaurant did.

You’ve been warned—stop reading now if you’re happy with the status quo.

In an average town, there was an average restaurant. Nothing special—they had good food and good service. Guests came in, had meals and a few libations. They had a few laughs, paid, and went about their days. Nothing ever stood out.

The owners were kind and gentle people who just wanted to maintain the level of business they had achieved over the past several years. They had become, in a word, satisfied. Things were comfortable and life was good.

The plot twist? You’re those comfortable owners. The new operators are taking your market share. You didn't see them as a threat and that was your first mistake.

Within a month, the local operators started to notice that they hadn’t seen a few of their regulars who would come in each week. The following month, even more regulars seemed to disappear. Legend has it that the Bogeyman of Marketing had gotten to them. They just vanished without a sound.

The Bogeyman of Marketing is a figure that operates from the shadows. He comes when you stop paying attention to your marketing. When you become complacent he’s just around the corner, lurking. How do you stop him from taking away your precious guests and revenue?

By understanding that you create the Bogeyman. There are three elements that brought this creature to life, and we’re going to look at each one so you can defeat it.

It all starts with a seemingly small gesture: You make a negative comment about a guest or a staff member to someone else. It seems like nothing, like if you tossed a pebble into a calm lake. However, that pebble disrupts the surface of the sake, causing far-reaching effects. That seemingly small comment you made does the same in your restaurant.

You might say you’re just “being honest” or “keeping it real.” No, you're creating negative energy that infects your culture.

Negativity breeds more negativity—once it gains momentum it's hard to stop or contain it. Like cancer, its only goal is to destroy its host. You could argue that it's just one comment.

The reality is that what you said is just one comment…that you’re aware of. There are countless others you have made that you’re not aware of, and it's those that have created the toxicity within your culture that now threatens to destroy the ecosystem of your brand.

How do you stop this?

Becoming self-aware is the first step. The second step is to stop it. Stop spreading negativity or allowing others to spread their negativity. It's true that you get what you tolerate, both from yourself and from others. If your culture is a runaway train of negative energy, you allowed that to happen. You also can stop it by saying, “No more.”

Most negative energy is created out of fear. It's a defense mechanism hard-wired into humans for our survival. We don't have large animals around the corner trying to make us their dinner (for the most part) like our primitive ancestors did but our brains are still wired that way.

Fear makes us contract our efforts. Restaurants and bars need to expand but fear makes you do the total opposite. You didn't always have fear running your restaurant—when you started you were focused on growing your brand and you played offense. Along the way, you had a taste of success and you became more concerned about protecting what you have. Your mindset flipped to playing defense. Fear became your guiding internal voice, begging you to avoid taking chances so you wouldn’t lose what you have.

Here's the thing: You’ll never keep what you have with a fear mindset. Maintaining the status quo isn’t an option in an oversaturated market like we have now—playing it safe is a stupid move. You want to develop the mindset like King Leonidas from the movie 300: This…is…YOUR MARKET!

You must claim your position in the market and aim to dominate!

When you get comfortable, you’re dying. You might not realize it, but you are—it’s just much slower.

How does it happen? It comes when you get a little taste of success and then stop pushing to stay out in front of your competition.

Perhaps when you opened there wasn’t much competition to be worried about. So, you took your eyes off the market and assumed the gravy train would run smoothly forever. Then the Bogeyman of Marketing came to town and started to take your guests. By the time you were aware of it, it was too late—they’re gone.

Loyal guests stay loyal for one reason: you make them feel like they’re the only guests when they walk through your front door. You shower them with hospitality and consistency in your service, food, and beverage. You never leave anything to chance. You sweat the small stuff and pay attention to the minute details. Some may say you’re obsessed, the best compliment you can get. Obsession ensures you’ll keep your edge and makes you hungry to improve.

Complacency is a sleepy companion to the status quo.

If you aspire to just maintain, you’re better off closing your doors now. Complacency is like being on life support—you’re not really living, you’re just existing. It’s time to pull the plug.

The Bogeyman of Marketing is out there, waiting for you to take your eyes off the prize and slip into your comfort zone. After he takes enough of your guests he’ll summon his cousin to finish you off.

Perhaps you’ve heard of him?