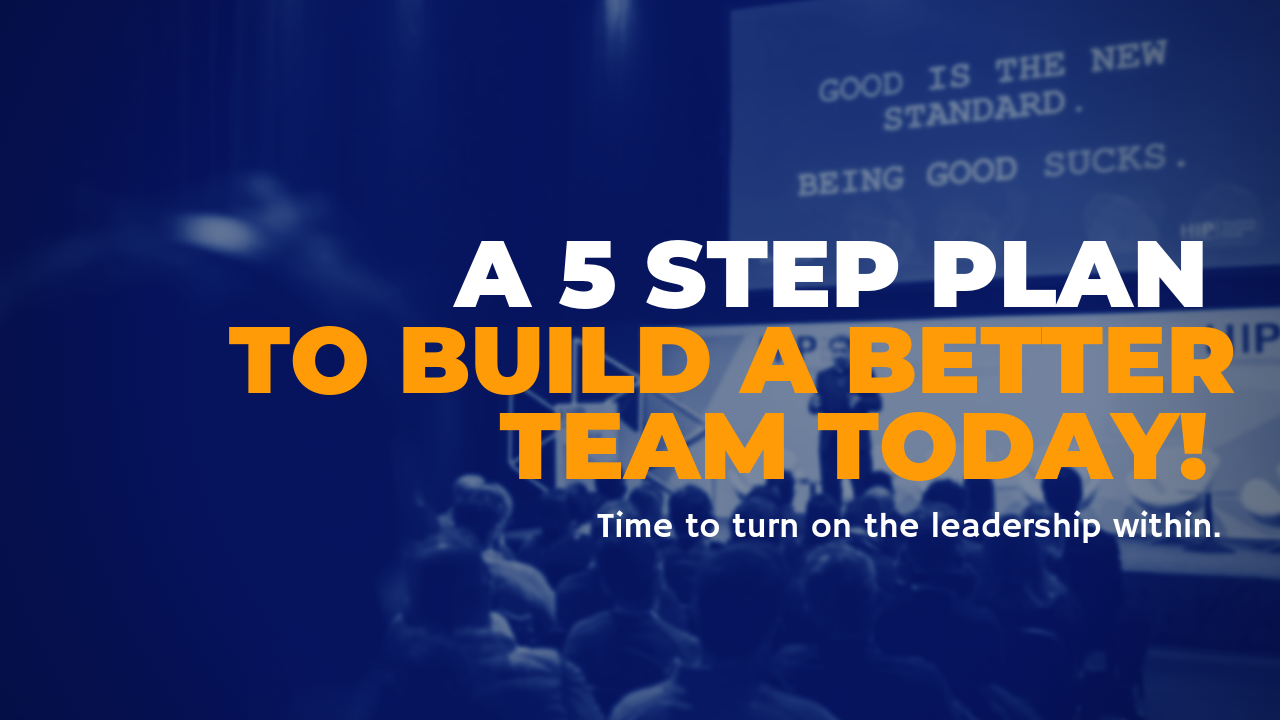 A 5 Step Plan to Build a Better Team Today!

You have a problem that we need to address. It’s your service team.

Okay—that’s not exactly accurate. The problem is you for not training your service team enough.

Sure, you trained them…maybe once, maybe twice. But half-ass effort yields half-ass results. Oh, and please, for the love of all that is sacred, don’t throw out the excuse that you don’t have time. You never had time to begin with.

Things get done when you make a decision and develop the self-discipline to get what you want. If your service is so-so, the effort you placed into training them was at that same energy level. Water truly does seek its own level; mediocrity is attracted to mediocrity.

How do you get there? How can you create a service team that just dominates your market? I have a five-step plan for you!

When you’re the leader in your bar, nightclub or restaurant, you become a source of energy that feeds the culture, much like our sun radiates heat and energy out into the solar system. Many tend to give the most energy to those who are close and who they like the most.

Those close to the energy source have it good. But if you’re like Pluto or Uranus, your days are relatively cold and isolated. No one wants to be Uranus!

You’re the energy that creates the culture. Bad culture = bad energy = bad leaders. It’s not a complicated equation. If you can take ownership of the idea that your service team gets their energy from you, then you’ve managed taking a big step forward toward a better restaurant.

Au contraire—it has everything to do with those!

Restaurants get better when the workers in them become better people. You can’t raise your restaurant without raising yourself. Most people learn based on what’s known as modeling: we imitate the behaviors of others because we’re chock-full of mirror neurons. These neural networks help us learn at a fast pace and we need them if we want to survive.

You’ve been modeling the behavior of others your entire life. From your parents to your siblings and friends to those you admire like teachers, mentors and coaches. You might not have realized it before now, but your behavior is a collective of other people’s behaviors to which you’ve been exposed—both the good and the not-so good.

Being obsessed with becoming a better person is the only path that leads to you building a service team that dominates your market. The word “obsessed” gets a bad rap because many associate it with being out of control. And yes, that can be true if an obsession can’t be kept in check. In other words, you either control your obsessions or they control you!

Read, listen to podcasts, watch YouTube videos, substitute audiobooks for music while driving, go to seminars, find a mentor, get a coach… Becoming a better person does not require you to sit at the top of a mountain, shave your head, and meditate for hours on end; it just requires you to become obsessed with learning one new thing each day!

We build our restaurants by building ourselves. Leaders are forged through chaos, pressure and discipline. Anyone who says that leadership is easy is full of shit.

3. Practice until they whine. Then practice more.

Now that your energy is amplified and you’re becoming a better person, it’s time to train. Here’s where the path you’re traveling comes to a fork: you can either take steps toward dominating your market or shuffle toward settling into mediocrity.

Mediocrity is the easy path. Easy doesn’t get you shit.

Elite athletes who want to win an Olympic gold medal know that they must commit to training every day. In fact, they’re aware that they may need to train multiple times some days. To dominate and become elite you must make a new commitment to train your team every. single. day.

There are no days off for training if you’re aiming for the top!

Training must become like your dedication to become a better person: an obsession. Here’s the easiest system to use to stay on the path to greatness:

Stay the course with this new mantra: You either play at my level or you step aside.

Look at the people on tour team right now. Would you say honestly that they’re all at the same skill level? Of course not. You have your A players, B players and C players. (You shouldn’t have any D players working in your restaurant. If you do, fire them and give yourself a time out for bad team selection.)

Now, look at your team again. Do you have everyone playing to their strengths? Most likely you’re just filling positions and shifts. You’re not looking at your team as assets., you’re treating them the same or worse less than they are.

When you treat all your employees the same and try to be “fair,” you’re playing a big game of checkers. Now, when you look at each individual on your team for their unique strengths and position them to leverage their useful abilities, you’re playing chess.

You’ll never develop a service team that dominates by standing in their way. That means you can’t do their job for them. Do you want to lead, teach, coach and train? Hell yes! Do you want to take away from someone else learning, growing and developing? Hell no!

Let me provide a few examples:

If you’re in a salaried position and you’re doing the job that’s normally fulfilled by an hourly position, you’re not managing your assets properly. When you take away opportunities for people to grow, they leave to work at a restaurant that will help them grow.

Now it’s time to follow the same directions on your shampoo: rinse and repeat. Excellence, greatness, and market dominance require one critical element, and that’s consistency.

It’s not about taking one step toward being a better person, a better leader, training your team, and suddenly achieving greatness. You’ll never be “all set” that way. It’s about developing the discipline to take many steps and following through, even when you don’t want to do it!

“Don’t expect to be motivated every day to get out there and make things happen. You won’t be. Don’t count on motivation. Count on discipline.” - Jocko Willink, Retired Navy SEAL Commander

It’s time to step up and into your potential. Once you start down that path, a true leader allows others to step up into their greatness. It’s all synergy. Each element on its own is great—combined effectively, they become unstoppable.